Who are Greenleaf Contractors Ltd?

Greenleaf Contractors started in November 2000 as a Farrow System Franchise, then evolved into one of the four members of the Ashrose Group (we remain part owners of Ashrose Group Ltd)

Greenleaf Contractors Ltd was formed in 2000, initially as a 'Farrow System' franchise. Nigel Farrow's short lived franchise organisation with members operating his Farrow System across the UK. We were his first franchisees, and were sold an 'exclusive' territory in Yorkshire 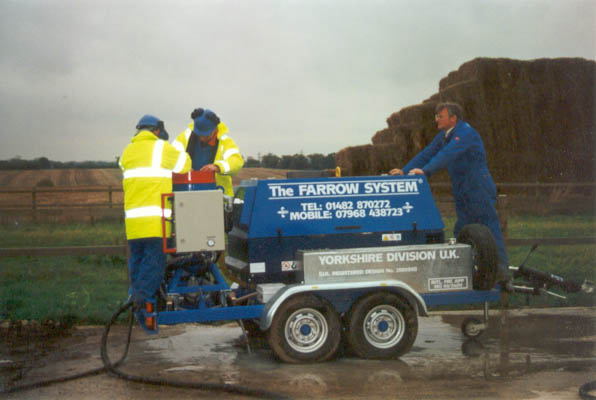 Here are three of our first employee's practicing with the machine in Mr Farrow's yard down in Norfolk. We found ourselves with a 'rig' but no towing vehicle, as the 'deal' Nigel Farrow had done with the local Mitsubishi dealer had meant that our brand new L200 in company colours wasn't available for some weeks after we had paid for it!

The franchise organisation failed in late 2001 / early 2002. there were a couple of reasons for this, firstly the exclusive territories weren't very exclusive (as Nigel hadn't actually invented the machines, there was nothing he could do to stop our next door neighbours buying and operating one from the actual inventors and builders of the machines). There were discussions about his selling us 'a unique' machine, rather than 'the unique' machine! Secondly the 'Farrow Formula' abrasive had actually been banned by the Health and Safety Executive for much of 2001 and Nigel hadn't told us.

Four of the ex-franchiees (those who were on speaking terms with each other) formed the Ashrose Group. (while attempting to sell the machines back to, and get our money back from, Mr Farrow!) 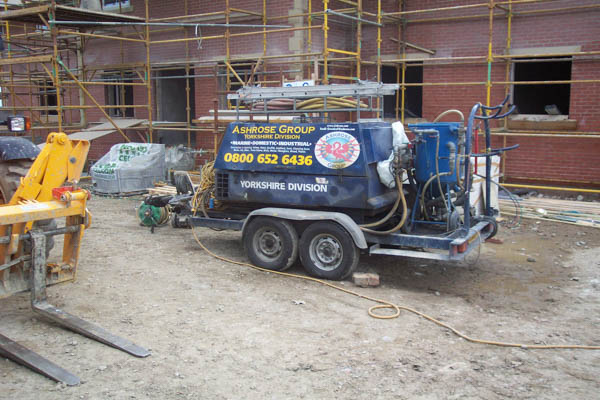 This is that same machine, a few months later, re-signed looking a bit older! 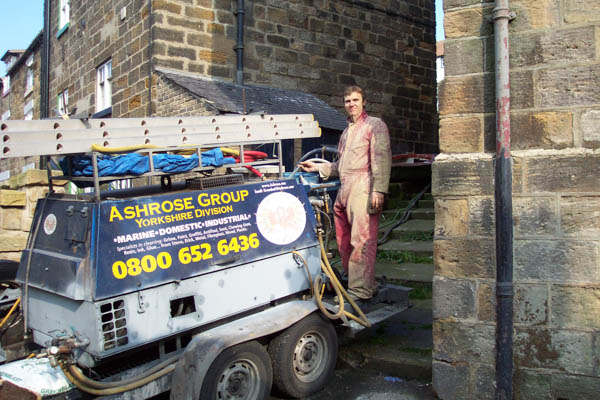 Another year or so went by, and two of the group went their separate ways, our London man Steve, sailed round the world and ended up (presumably) back in New Zealand - we haven't heard of him since. Our North East and North West man Richard bought a very large number of chickens, and started wholesale egg production. This left the remaining pair to continue, and we, as Greenleaf Contractors, set up our own website (this one) - mainly because we couldn't get anyone to contribute pictures, text or money to progress the Ashrose Website.

In the original franchise, we were only allowed to provide a 'farrow system service', now we are our own masters, we now specialise in more diverse and appropriate surface preparation and cleaning services, which include

If you are looking for a contractor then we can help! We cover a wide geographic area including the whole of Yorkshire, Lincolnshire, Nottinghamshire and Derbyshire, regularly working in northern cities and towns such as Leeds, Bradford, Newcastle, Sheffield, Hull, York & Lincoln. In the past years we have also travelled as far as Essex, Aberdeen, Edinburgh, London (lots!), Birmingham, Anglesey, Llandudno, and deepest Cornwall; This is the tracker log from on of our machines for a couple of months (I think) of autumn 2018 (and for some reason the tracker' software labels anything older than "100 places ago" as "100" ) 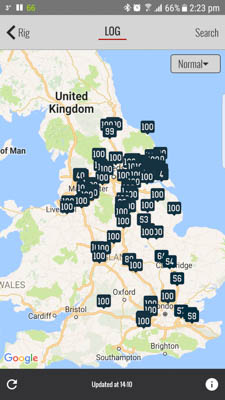 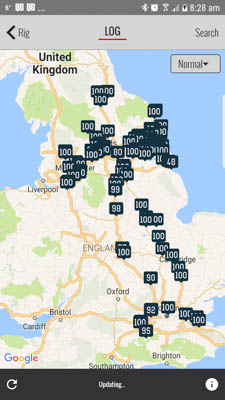 We at Greenleaf Contractors are a two man operation (although we have been a little bigger in the past) with both of us having had more than 19 years experience of doing the job.

The compressor and 'rig' featured in the photos above is the original one bought from Farrow System Ltd - Dear Nigel Farrow. Over the years - as seen in the photos above it got longer in the teeth and was eventually added to, then replaced by a second hand compair C76, and all was mounted on a Ifor Williams trailer rather than the 'Farrow Rig' - here is that unit working on a nice new police station in the middle of Hull. 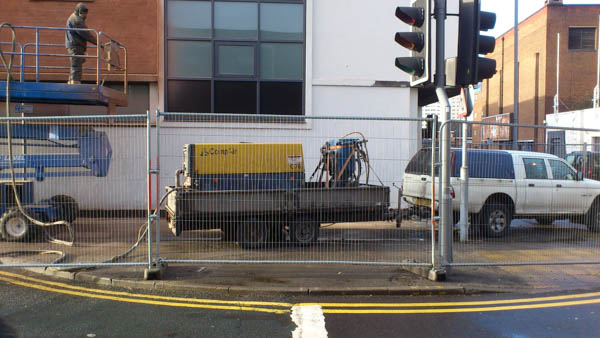 The C76 compressor died of a split cylinder and was replaced by an Ingersol Rand 7/71 compressor - on the same trailer - but with some added sign writing. 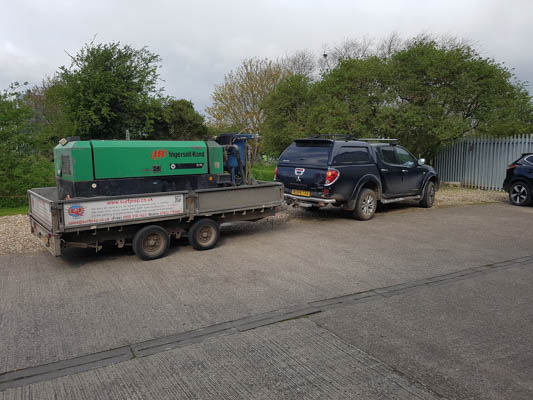 and in the latest development the trailer itself has now been upgraded. Partly as a result of a visit to the new sea defences on the Humber - where we sustained a broken spring on the trailer -and decided it was high time that we upgraded this essential kit. 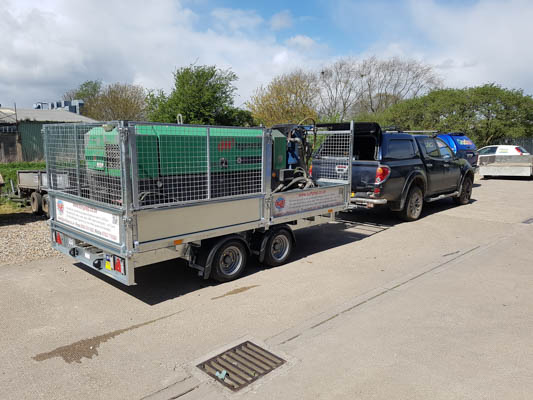 This is, therefore, typically the size of machine that might visit your property! 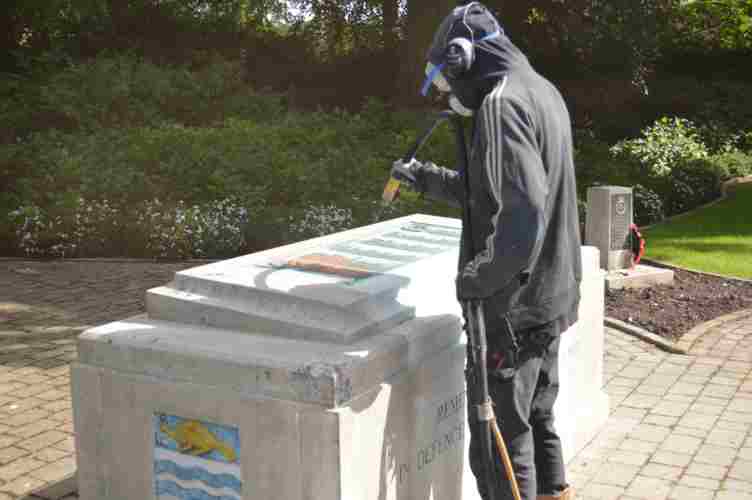 Louis doesn't say much, but just gets on and does the work, and we both believe that we are mainly brought onto building sites to prove that however bad your job is, we do something more unpleasant for a living! Digging out cesspits is the only exception we can think of, although sometimes when hot water pressure washing pigeon poo out of inaccessible places - we can sink that low as well! 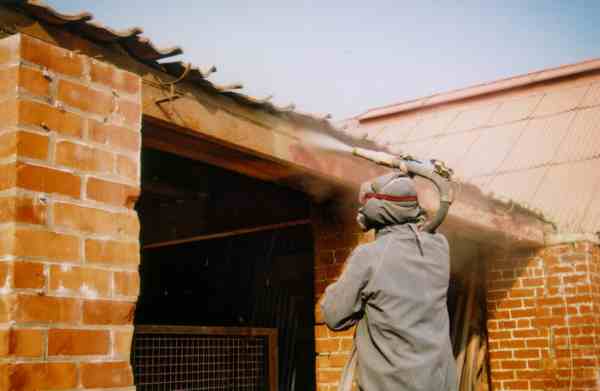 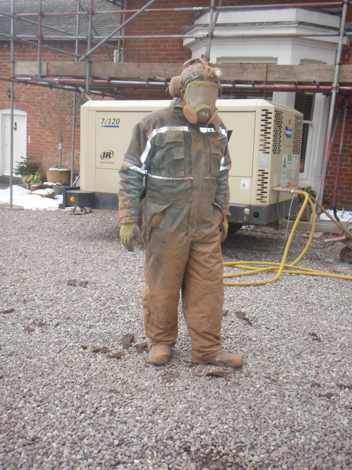 Tom (pictured above in his role as 'creature from the pit' - a lovely job in a cellar in Shropshire at Easter 2013) started his career as an Aerodynamicist at British Aerospace, initially as a Graduate Mechanical Engineer and progressing up the organisation to project manage 'one of the most expensive 100 gallon fuel tanks in the world' - he thought himself underpaid and undervalued until he started out on his own with a Farrow System Franchise!

He made the mistake of watching the BBC's Tomorrow's World program in February 2000 (actually to see an article on Ejection Seats) - saw Mr Farrow spouting about 'his invention' (standing next to a machine he had bought from a company down the road from him, in green, that he had painted blue and written 'Farrow System' on the side of) - and the rest is history.

This picture is perhaps a warning to others to wear appropriate PPE when dry ice blasting soot from old hot water systems! 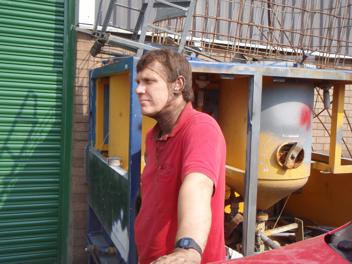 On the whole, both of us like the variation that the job offers and sometimes - such as with the bronze war memorials featured higher up this page it is very satisfying!

Tom also has an A+ for his Blood Group, a Master's Degree in Mechanical Engineering, and even has an M.B.A. (Master of Business Administration). When he isn't repairing blast machines, bank accounts, VAT returns, vehicles and trailers, or indeed Websites (for he is the web master), oh, and pricing jobs, he is probably catching up on some well earned sleep!

We are insured for £10 million Public Liability and Employer's Liability.

Our Blast Pots (unlike many in the industry!) have pressure test certificates (this is a 2meg file - so ask and we will send!)