Once steelwork has been blast cleaned, it starts to rust rapidly; with our damp blast sand jet this happens in a matter of minutes. In this photo you can see that the left hand side of the test patch has already started to rust. This is the disadvantage to this blast system - while the advantage is the reduced levels of dust, cost effective abrasive use, and safe blasting of toxic paints such as lead based paints. We do also operate dry blast pots - but a dry blast pot, used outside in the damp, can generate flash rust almost as rapidly - with a lot more abrasive flying around too! 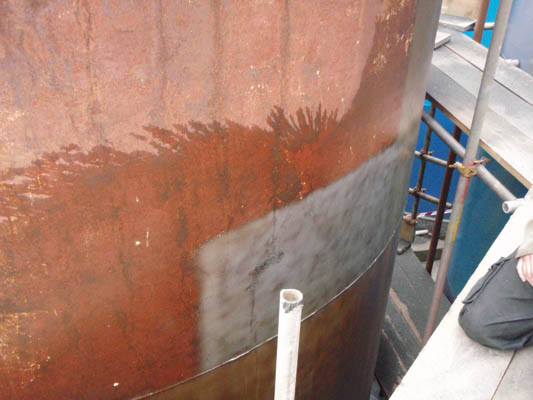 Primers and Topcoats can be applied to protect the steel from corrosion. Zinga is a one-component cold applied galvanic zinc coating. Its unique formula provides environmentally safe cathodic protection to steel comparable with hot dip galvanising, with the added advantage that it can be applied, on site, like a paint. We now do favour moisture curing urethane products from Trident coatings for example, and topcoats from Firwood. The Moisture Curing Urethanes work down to -15 degrees C and at high humidities. This allows on site painting to take place, outside in Winter! Much of the Aircraft Hanger below was painted with snow on the ground - the paint coped with the conditions much better than the painters!

A complex web of metal in an ex Aircraft Hangar - cleaned and primed with MCU Aluprime Spring 2009. (easier to see in the photo the sections that haven't been painted. To add to the complications, due to other site works - the painting had to be done at night! 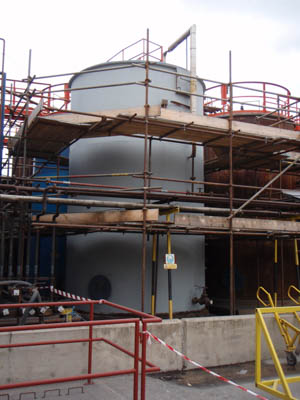 This is the tank being blasted in the first photo on this page - Cold Galvanised with Zinga - along with the 5 or 6 tanks alongside it. The issue with these tanks was that they were wrapped in insulation and heated to keep the cod liver oil inside them flowing. 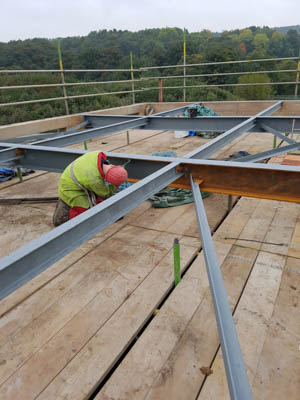 This roof structure of a Waste Water pumping station in Bradford was blasted, primed and top coated with Moisture Curing Paints in October 2017.

This was another building on the same site - yes - the cranes in both building had to be blasted and repainted as well! 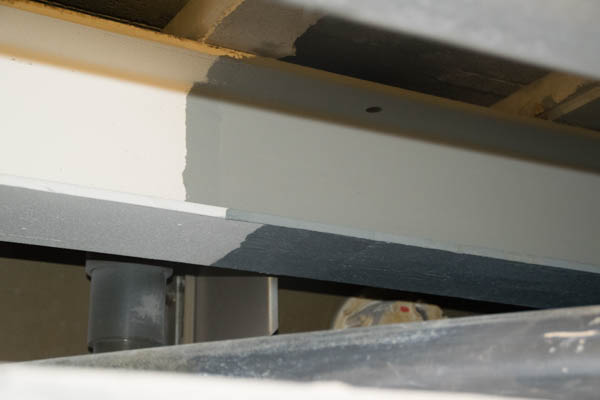 This was the metalwork under a slightly leaking swimming pool in Sheffield - water seeped through the grouting of the floor around the pool and was causing corrosion issues below - and the designers hadn't made access to the metal structure easy - water injection and extraction pipes were in every direction - and access to the metal meant a 25m crawl into an increasingly tight space. Oh, and every time someone used the pool above water dripped onto the surfaces too! This was dry blasted and then coated in two coats of MC Zinc - the Moisture Curing Equivalent of Zinga - that gives better tolerance to solvents - and can be over coated with ease. This was then coated with an Intumescent coating by another contractor. 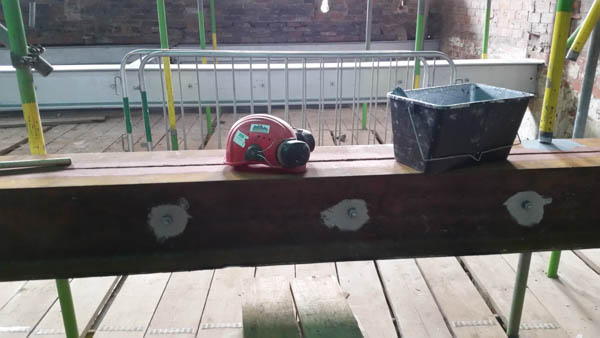 These beams were part of the fruit market re-development in Hull. Originally covered in lead paint. The photo taken to show that we did apply a stripe coat to the bolt heads! - the beams in the background had been done some weeks before - the beam in the foreground being inaccessible at the time.