We provide a sand jetting service across all the UK, based in Yorkshire, we can easily reach all of Yorkshire, Lincolnshire, Nottinghamshire and Derbyshire, but regularly work further away than this. Sand Jetting is also known as grit blasting, sandblasting, shotblasting, JOS blasting, TORC Blasting, slurry blasting and vapour blasting. We also like to refer to our service as damp blasting, because it isn't as dry as traditional grit blasting (and dust is suppressed as a result), but it also isn't as wet as traditional slurry blasting (where dust is suppressed by a lot of water - resulting in a lot of water run off.  For us it all started in 2000...

Our company was originally formed as a Farrow System Franchise, in fact we were the very first franchisee - starting in November 2000.

A year later the franchise organisation collapsed in December 2001 - due to the number of 'economies with the truth' made by Nigel Farrow. We were the fourth franchisee to disassociate with Farrow System Ltd and we did so in January 2002. We still operate the same machines as in the Franchise (we did offer to sell them back to him!) - it is just that we know the origins of the machines, and why 'Farrow System' is an inappropriate name! The ex-franchisees formed a new company 'Ashrose Group' to offer the same services.

Should you wish to see the machines in action, then You-tube is full of video demonstrations of the machines, but I would advise watching with the sound turned down. The abilities of the machines is self evident from the videos - the commentaries have a tendency to get a little too much 'hocus pocus' added! Here is one of our (duller!) videos.

I should note that I use 'sand' as a general term throughout the site as this is the typical term that customers use. In fact you need to be very wary of anyone who actually still uses 'sand' - as if it isn't of the right type and contains free silica (as natural sands - like the stuff on the beach - do) this can cause silicosis which is a similar disease to asbestosis. So... when I say sand I effectively mean 'grit', which could be described as a sand like substance with no free silica in it. The key to all sandblasting or indeed shotblasting is to have a consistent flow of abrasive heading towards the surface being cleaned. With traditional sand blasters abrasive falls under gravity into the airstream - and heads towards the surface, relatively high flows of abrasive are required to ensure consistency in the flow of abrasive. The machines we use aka 'The Farrow System' have sand and water in the blast pot (traditional machines need to be kept scrupulously dry - for damp sand is a nightmare because it doesn't flow!) Water is pumped into the blast pot, displacing the sand and water slurry into the air stream. This active pushing of the abrasive out of the pot allows much smaller flows of grit to be consistently managed - resulting in a controlled gentle blast.

So we specialist in using a specific 'adjustable pressure, low consumption damp sand jetting system' that has been used nationwide for property restoration, including gaining approval for and subsequently working on many Listed Buildings.
The links on the top right or the site menu should lead you to a page with further details.

here is a selection of our sand jet cleaning photos - many will occur elsewhere on this site! 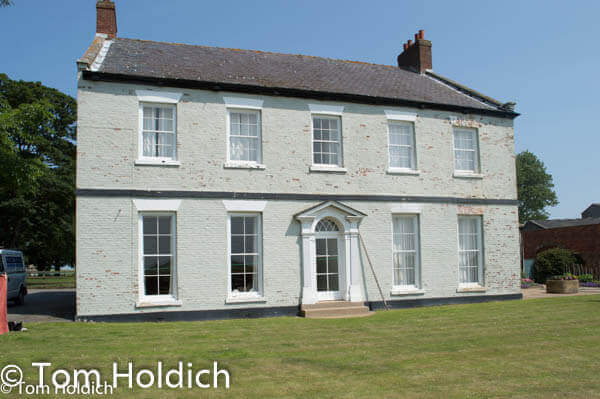 However, in some instances traditional dry sand blasting do have advantages - the debris created is dry and can be swept or vacuumed up easily, and iron surfaces don't suffer flash rusting as rapidly; so we also offer traditional dry blasting as a service.
Sometimes chemical stripping is the answer - particularly from delicate surfaces that might scratch such as glass.
For all round cleanliness, few techniques come close to dry ice blasting - where the only residue left after cleaning is the removed contamination.
In a similar way, pressure washing is also a service that we offer, many surfaces can be cleaned effectively with water - and perhaps a little soap.